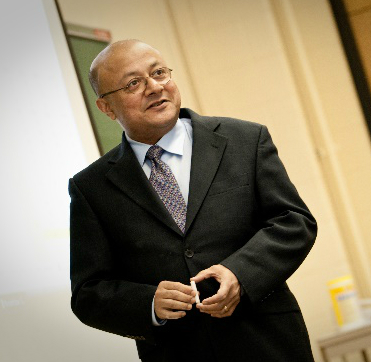 "The Dark Side of Finance," an Indiana University 54-minute video of my research philosophy

Read my satire in the New York Times about fraudster Madoff

The University of Chicago Booth School of Business (2010-11)

* Research Associate in the Center for International Business Cycle Research

* Nominated for the Trustee Teaching Award (Kelley School of Business, Indiana University) five years in a row. Won in 2004 and 2008

* Best Paper Award, Conference on the Theories and Practices of Securities and Financial Markets, Taiwan, 2002

* Nominated for the Sauvain Teaching Award (Kelley School of Business, Indiana University) in 2002 and 2001

* Nominated for the Best Teaching Assistant Award at Columbia University (1985)

* First Prize in the National Competition for Young Managers in India (1983). Represented India in the Asian Meet at Kuala Lumpur, Malaysia

* First Division with Distinction in Engineering in India (1980)

34) Spillovers in Prices: The Curious Case of Haunted Houses (with Daisy Huang and Kasper Nielsen), Review of Finance, 2020, forthcoming

18) "The Causes and Consequences of Recent Financial Market Bubbles: An Introduction," (with Xiaoyun Yu), Review of Financial Studies, 2008, vol 21, 3-10

Was an invited paper for this special issue on IPOs

8) "When an Event is Not an Event: The Curious Case of an Emerging Market" (with Hazem Daouk, Brian Jorgenson and Carl-Heinrich Kehr), Journal of Financial Economics, 2000, vol 55, 69-101

3) "Destructive Interference in an Imperfectly Competitive Multi-Security Market" (with Philip Reny and Matthew Spiegel), The Journal of Economic Theory, 1995, vol 65, 136-170

School of Economics and Finance, Tsinghua University, Beijing, China, May 2018

University of Illinois at Chicago, USA, May 2011

The University of Chicago Booth School of Business USA, April 2011

Finance Symposium at the University of Maryland, USA, November 2002, September 1998

University of Ljubljana, Slovenia, May 2002

Conference on "Global Competition in the Market for Markets," Duke University, USA, November 1993

In academia: Number of citations were 1,749 in SSCI and 6,702 in Google Scholar.    Six papers were lead articles in top journals.

Summer 2015: Finance to students from the Bank of Lithuania and Vilnius University, Vilnius, LITHUANIA. Rating: 5.66/6

Spring 2014: Finance to Ph.D. students at the University of Hong Kong, HONG KONG

Summer 2002: Investments to MBA students at the School of Economics, University of Ljubljana, Ljubljana, SLOVENIA

Summer 1997: Security Design to Ph.D. students at the Tinbergen Institute, Amsterdam, THE NETHERLANDS

Summer 1995: Market Microstructure to Ph.D. students at the Tinbergen Institute, Amsterdam, THE NETHERLANDS

Summer 1994: Law, Accounting and Finance to mid-level executives in St. Petersburg, RUSSIA (under the auspices of the Duke University Executive Education Programs.) Rating: 4.84/5

Chair of dissertation committee of:

Co-chair of dissertation committee of:

Member of dissertation committee of:

Co-organizer of the Indiana University-Review of Financial Studies Conference on "The Causes and Consequences of Recent Financial Market Bubbles," 2005


Member of "Task Force to Modernize Securities Regulation in Canada," 2006

* The Annual Review of Financial Economics

* International Review of Economics and Finance

* Journal of Accounting and Economics

* Journal of Economics and Management Strategy

* Journal of Financial and Quantitative Analysis

* Journal of International Money and Finance

* The Quarterly Review of Economics and Finance

* Committee to explore the feasibility of offering a degree program in Mathematical Finance, Indiana (1998-99)

* Committee to explore the feasibility of offering a degree program in Quantitative Finance, Iowa (1995-96)